Link to your individual collections by creating a new linklist in the Navigation section of the admin.

You can then have it appear here by choosing your new linklist under Customize Theme / Sidebar. So while most of what is said in this review remain unchanged about the Samsung Gear Icon X, that’s not true of the true wireless market as a whole. There have been plenty of new releases since the release o this review. Not only are there other premium options to choose from now like the Master and Dynamic MW07 and Sennheiser Momentum True wireless earbuds, but there’s also a number of other picks that won’t even cost you more than $100. 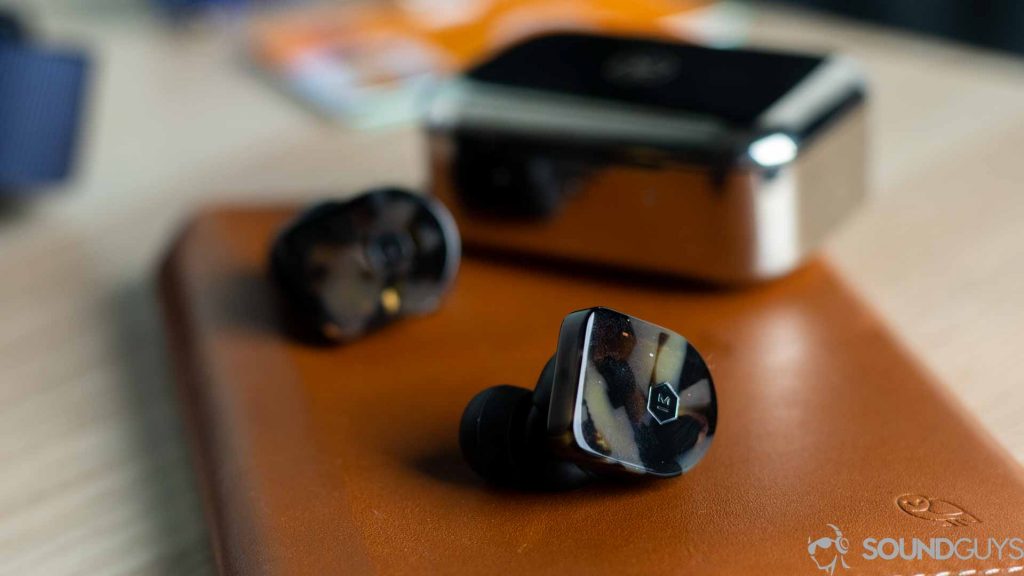 Notably, even those picks have fared better in our battery testing than the Icon X which remain at the bottom of the totem pole when it comes to battery life testing. So if you’re not 100% sold on these but still want a pair of true wireless ‘buds definitely check out our list for some solid options. Of course, you won’t get a lot of the health features or the discreet design that makes Samsung products so appealing, but they’re still worth checking out.

Furthermore, rumors are that Samsung is gearing up (pun intended) to announce a new pair of true wireless ‘buds tomorrow alongside. That means that the original Icon X will likely drop in price once there is a newer version making them an easier buy for most people. Of course, none of the cons in this review change just because the price has dropped, but it does make the issues a little more palatable.

Connecting to the Gear IconX The IconX have quick charging that gives you a claimed one hour of playback in ten minutes.

Let’s start off with one of the more important aspects of true wireless headphones: connecting to them. I was using the iPhone X and connecting was just as simple as connecting to any other Bluetooth device. There’s a small Bluetooth pairing button on the back of the pill-shaped charging case that allows you to connect to it pretty quickly. Obviously, it isn’t as fast and seamless as connecting to the AirPods with an iOS device, but the Gear IconX has a few other tricks up their sleeves that’s not available on iPhones so I guess we can call it even. I’ll explain some of these in the paragraphs to come, but here’s the full list via Samsung. The Gear IconX are missing some of its best features if you’re not using an Android device.

Once paired, the earbuds automatically turn on and connect to your phone as soon as you take them out of the case, which is always something I expect with true wireless earbuds. Furthermore, Samsung decided to only put in the Samsung Scalable Codec, so unless you have a compatible Android phone, you’re going to be downgraded to the standard SBC codec. This is especially true with iOS devices as they only have AAC compatibility. We’ll get more into what this means for the sound quality later, but while we’re on the subject make sure to check out the full codec explainer article to understand why they’re so important.

As far as playback controls go, nothing is OS-specific. Whether you’re on Android or iOS: you’ll be able to pause or play music with a single tap, skip between songs with a double or triple tap, and adjust volume by swiping up or down. Double-tapping answers a phone call, and tapping once and holding rejects a call. You can also double tap and hold to choose between playlists, because the Gear Icon X has 4GB of built-in storage. This means that you can exercise without your phone. 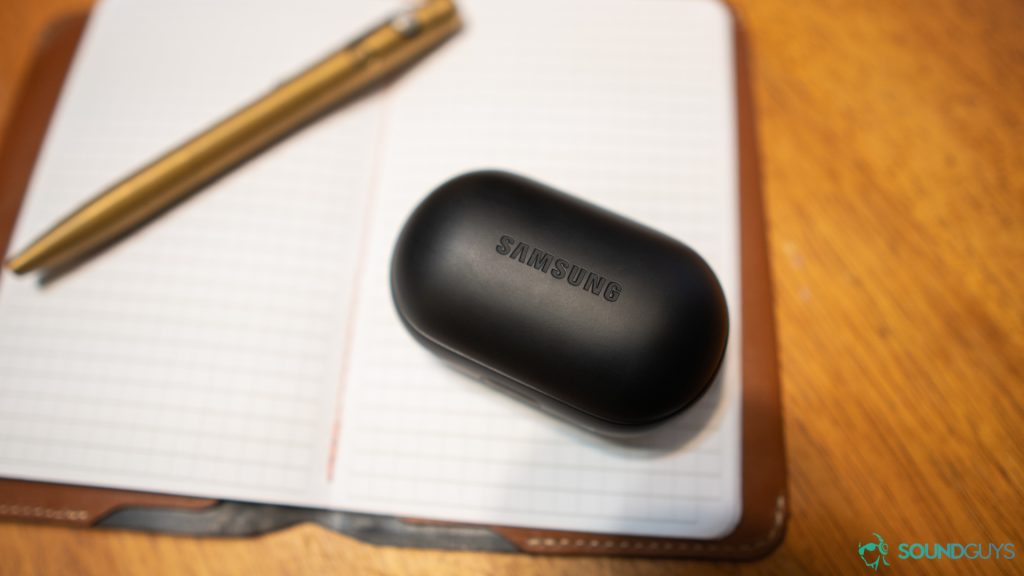 The charging capsule of the Gear IconX is pill-shaped, and though it’s well-built it’s awkward to carry in your pocket.

Of course, doing this requires the use of the Android app—sorry Apple users, you’re out of luck. You’ll have to transfer music the old-fashioned way—via your computer and the included USB cable. That isn’t the only feature you’ll miss out on if you’re rocking an iOS device. You also don’t get some of the health tracking features like real-time coaching and you’ll also miss out on ambient noise passthrough, which lets you hear what’s going on around you through the headphones. However, that particular feature is so buried in the settings with no apparent shortcut on the earbuds that I don’t think too many people will miss it. Though it is useful if you’re going to be going for a run outside and want to be aware of your surrounding. Playback was also fairly solid with only a few dropped connections in during my testing period. Though they did occur, I don’t think they were frequent enough to be of any concern.

Samsung has a good reputation when it comes to build quality, and the Samsung Gear IconX is no exception. The charging case is small and made of a smooth plastic; though, because of the pill shape, it’s a little awkward to carry around. I find it easier to chuck it into a backpack instead of finding space in my pockets. Once you open the case, you’ll get the earbuds which are IPX2 sweat-resistant, so you won’t have to worry about damaging them during an intense workout. 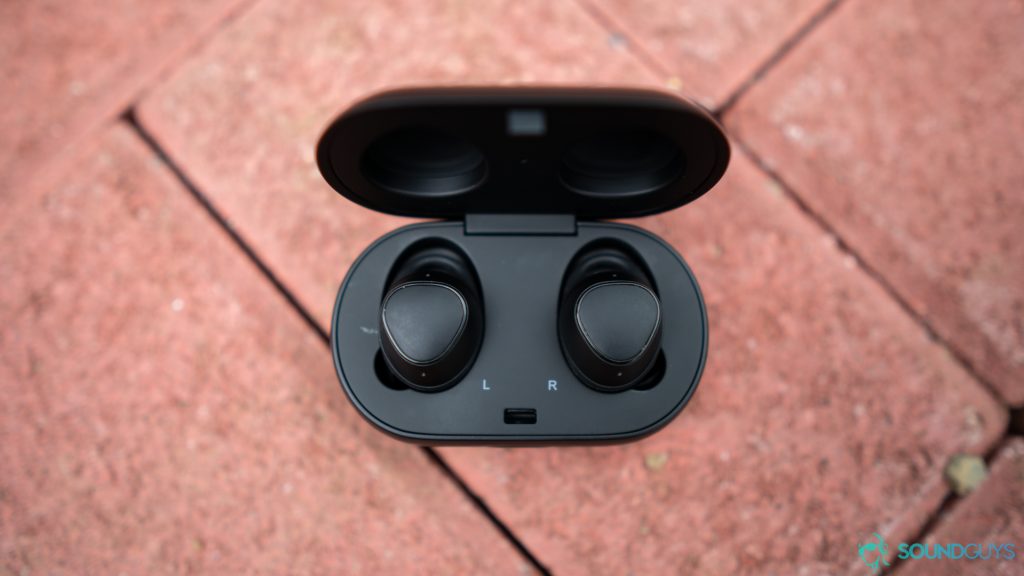 When you remove the earbuds from their case they automatically connect to the last paired device.

In my opinion, one of the best features of these earbuds is the fit. They’re small, so they don’t stick out of your ears in the same ridiculous way others do, and the silicone ear tips keep each earbud firmly in place during exercise. I went trail running and didn’t feel the need to adjust them at all, even throughout the sloping hills and occasional trip-ups. Normally I’d have to swap out the ear tips for some Comply memory foam ones, but that wasn’t the case here. Of course, they do come with some other options, so you can find which one works best for you. They come in black, white, or pink, so you can choose which one best matches your workout clothes (all-black everything in my case). Since there aren’t buttons on the earbuds, it maintains a minimal design. 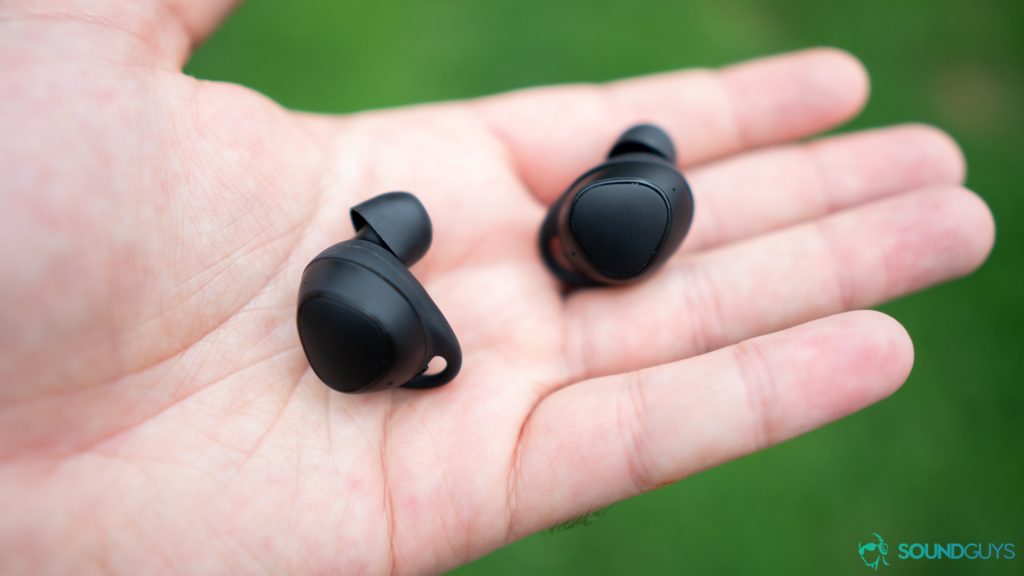 The earbuds are small and have a minimal design that won’t make them stand out.

Which brings me to one of my biggest complaints about these earbuds: the playback controls. Rather than buttons, Samsung went with small, touch-sensitive pads on the earbuds. And they suck. Either the touch area is too small or my fingers are too big (unlikely), but I almost always end up pausing the music when I’m trying to skip to the next song… or skipping to the next song when I’m trying to adjust the volume. I’m sure that memorizing the different combination of taps will help to some extent, but I think the controls are fundamentally flawed. To the point where if someone came up to ask me something, I would just take the earbuds out of my ear rather than bother trying to tap them.

And then there’s the battery life

If the Samsung Gear IconX has one fatal flaw, it’s the battery life. Whoever it was at Samsung that designed these earbuds and dipped them into the River Styx must have been holding them by the battery. Though Samsung claims about five hours of constant streaming, we barely managed to scrape 1.5 hours in each of our three test runs. The chart seen below is borrowed from our true wireless list and makes it clear how bad the battery life is. Something worth noting is that the chart below is automatically updated as we test new products and input the information. So even now in 2019, after having reviewed these headphones so long ago, they’re still at the bottom of the list. The battery is that bad.

Adjusting the volume to an output of 75dB. Then we let them play until they died. On three separate occasions, they died well before the second hour. I also used these for our weekly team meeting on a group call and though the quality was fine, the right earbud died one hour into the meeting. On the bright side, these do have quick charging, so only 10 minutes in the charging case gives you another hour of juice. Speaking of which, the case charges. which is especially good if you have a relatively new Android phone as they all pretty much charge via the same cable now.

As we mentioned earlier the Gear IconX doesn’t have any high-quality codecs, so anything you listen to is going to be streamed via SBC—the lowest common denominator in terms of data delivery. But despite the technical limitation, the IconX sound surprisingly good. We tested the Frequency Response and, as you can see in the chart below, they’re fairly flat.

More from this collection

Buy One Get One i11 Wireless Bluetooth Airpods With Charging Dock

I11 Wireless Airpods With Charging Dock